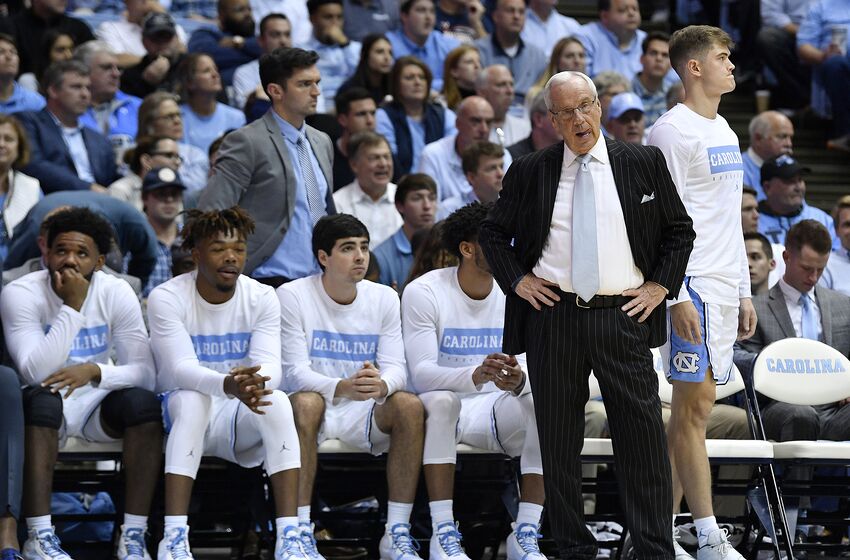 CHAPEL HILL, NORTH CAROLINA - DECEMBER 04: Head coach Roy Williams of the North Carolina Tar Heels watches his team during the second half of their game against the Ohio State Buckeyes at the Dean Smith Center on December 04, 2019 in Chapel Hill, North Carolina. Ohio State won 74-49. (Photo by Grant Halverson/Getty Images)

The UNC Basketball program had a bad week, going 0-2 and then falling in the latest AP Top 25 poll that was released on Monday

It was a rough week for the North Carolina Tar Heels men’s basketball program.

After going 2-1 at the Battle 4 Atlantis in the Bahamas, suffering their first loss of the season, the Tar Heels followed it up with a winless week against two Top 10 opponents. UNC dropped their home game against Ohio State last Wednesday in blowout fashion and then fell to Virginia on the road Sunday afternoon.

With that 0-2 week, UNC also fell in the latest Associated Press Top 25 Poll.

The Tar Heels fell 10 spots from No. 7 to No. 17 in the poll, the biggest movement either up or down among all teams. It’s actually surprising that UNC is at No. 17 considering how they looked in the two games, scoring a combined 96 points.

Louisville solidified the No. 1 spot in the AP Top 25 and Ohio State moved up to No. 3. Read more: https://t.co/KWrUTzmLL0

The Tar Heels are now 6-3 on the year and 1-1 in Atlantic Coast Conference play with just a few non-conference games left. One of those games will be at No. 6 Gonzaga in a few weeks.

UNC is one of five ACC teams ranked in this week’s poll. Louisville held down the No. 1 spot while Duke moved up to No. 7, Virginia fell to No. 9, and Florida State fell to No. 21. No other ACC teams received votes in the poll.

The Tar Heels return to the court to take on Wofford next Sunday before preparing for their showdown with Gonzaga the following Wednesday. If UNC wants to climb back up the polls, they are going to need to win those games.

Next: UNC falls short to Virginia on the road

For more on the UNC Basketball program, please check back with Keeping It Heel.